The Hang is a musical instrument which first saw the light of day in Bern Switzerland and was introduced to the public at the Musikmesse Frankfurt in the year 2001. It was invented by the instrument makers Felix Rohner and Sabina Schärer (PANArt Hang Manufacturing Ltd.).

They also refer to the Hang as a sound sculpture in order to point out that the Hang sound is an artistically shaped sound. Individual artistic hammer work by the sound sculptor is needed so that the sound has an effect. From the PANArt tuner’s point of view the Hang is an instrument for the individual to tune his life. This sets it apart from the steelpan in Trinidad that is an instrument for the steelband as a collective. 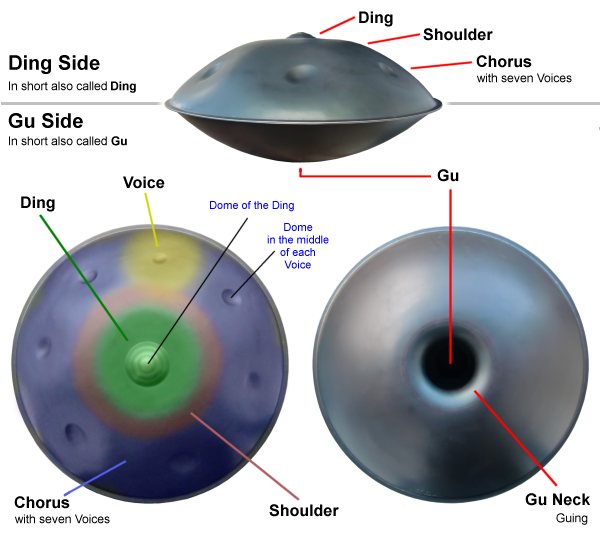 The Hang is a vessel made of Pang, a patented, gas nitrided

sheet steel, that the PANArt tuners originally developed for the construction of steelpans. On the top of the Hang there is a central “gong-like” tone field called the Ding surrounded by the chorus, a circle of seven tone fields called voices. The bottom side has a round resonant opening, the Gu, that generates a dark bass sound, the sound of the air in the vessel.

The Hang is played with the fingers and hands. This helped to give the Hang its name: Hang in the Bernese dialect means hand. It is pronounced [haŋ]

The Hang was built in various stages of development between 2001 and 2013. The picture shows the Free Integral Hang, which was available from autumn 2009 up to the end of 2013. Since the beginning of 2014 the Hang is no longer offered.

Hang® is a registered trademark of PANArt Hang Manufacturing Ltd. It is also used for other instruments like the Hang® Bal, the Hang® Gudu or the Hang® Urgu.

On the Internet the Hang is sometimes called a hang drum. Read more about the origin of the term and why this expression is not suitable for the Hang in the article What is a hang drum?