This article was originally written to provide people interested in the purchase of a Hang reliable and up to date information. The current version of the article gives an overview of the distribution of the Hang from the beginnings. You will find links to current informationen about the Hang and PANArt’s present work at the end of the article. 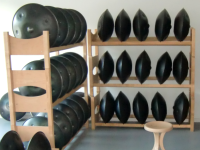 In March 2001 the Hang was presented to the public at the Musikmesse Frankfurt. In the following years PANArt developed an international retailer network which by 2005 included a distributor each in Austria, Australia, Canada, England, France, Germany, Israel, Italy, Japan, the Netherlands, Spain, Sweden and the U.S.A. as well as several music stores in Switzerland. Due to the growing international popularity of the Hang, the distributors kept sending longer and longer order lists. The necessary freedom required by a creative process was being challenged by the pressure of increasing demand.

With the introduction of the second generation Hang in 2006, the distribution through the retailer network was therefore discontinued. A from then, Hanghang could be obtained only directly from PANArt. During 2006 and 2007, those interested in purchasing a Hang had to request an appointment at the Hangbauhaus, the PANArt workshop in Bern. In 2008 and 2009 the Integral Hang was shipped upon request.

Whereas an average of 850 instruments was sold per year between 2001 and 2005, sales in the following years decreased to roughly half that number. This reduction can only be partly attributed to a more complex and time-consuming production process of the newer Hang generations. It was actually due to PANArt’s professional identity: Felix Rohner and Sabina Schärer do not regard their enterprise as a manufacturing facility for musical instruments. PANArt could rather be compared to an artist’s studio where the Hang makers work on the sound of metal every day. In their Newsletter from May 2010 they wrote: “It is essential that each Hang is accounted for as an individual sound sculpture: it is supposed to be effective. Therefore, there are only a few available….”.

Up to 2008 most interested parties could count on a Hang as long as they followed the procedure of writing requests, traveling to Bern and taking a longer waiting period into account. During 2008 and 2009 it became evident that the supply of instruments could no longer meet the demand. The pile of unanswered letters kept growing. At the end of 2009, Felix Rohner and Sabina Schärer decided to make a selection of whom to invite to the Hangbauhaus. Everyone else received a negative letter.

Only posted letters to PANArt regarding the purchase of a Hang were accepted. E-mails were no longer answered as from autumn 2007. Moreover, visitors who arrived unannounced and without prior request could not expect to be welcomed and to be able to order or take along a Hang. Every few months a selection from all of the submitted enquiries was made and the sender received either an invitation or a negative answer.

Beginning with the sale of the Free Integral Hang in spring 2010, the practice of shipping instruments to customers was discontinued again. This procedure proved to be unsuitable. With a visit to the Hangbauhaus, the Hang makers wanted to provide their guests with an insight into the birthplace of the Hang and convey their idea of playing a Free Hang.

Another important point in making the journey to Bern is the fact that the Hang is not a standardized musical instrument. Actually, each Hang is an individual sculpture of designed sound. Not without reason do Rohner and Schärer sometimes refer to themselves as metal sound sculptors in order to characterize their work. Because playing a Hang implies interacting with an individual, pre-designed sound, each client should use his visit to the PANArt workshop as an opportunity to choose a Hang that appealed to him, a Hang that motivated his interest to sink into the sound. During the designated visiting periods, there were enough instruments available to try out and choose from.

With respect to their professional identity, PANArt only distributed products resulting from their current work on the metal; older versions of the Hang were not available. Furthermore, it was not possible since 2008 to order a Hang tuned to a specific scale.

From 2008 to 2011 the price of a Hang including the case was CHF 2000. Because of the extreme developments in the currency exchange rates, the price for customers from the E.U. increased from € 1200 up to € 1800. In 2012 the price was raised to CHF 2400 (€ 2000). This was still far below the prices obtained for used Hanghang on Internet platforms such as eBay. Therefore, a general speculation prohibition was included in every sales contract issued since 2008: The purchaser may not sell his Hang at a higher price than the price he paid himself.

In summer 2013 PANArt introduced the Gubal.

Here you will find current information about the Hang

on PANArt’s website. In addition the article Pang music – the new art form from PANArt