This article explains origin and usage of the term hang drum and should answer the question of why PANArt’s instrument is a Hang and not a hang drum.

You can see it in hundreds of videos on YouTube, it is “liked” on Facebook, and on eBay it seems to guarantee high bidding prices: the hang drum. Even though everyone is talking about it on the Internet, there is the constant reminder that this instrument is actually called a Hang. Should you try to find the expression hang drum in any of the publications by Felix Rohner and Sabina Schärer, the Hang makers at PANArt, it will be in vain. And if you ask Hang players about it, many will express a critical view.

The term hang drum was first used in 2002 by Lark in the morning, a musical instrument dealer, who at that time sold the Hang in the U.S.A. This new name was one of the reasons why PANArt decided to terminate business relations with this distributor. Once set in use, the term spread quickly, mostly in the English speaking regions and on the Internet. The combination of Hang with another term made it easier for it to be found in search engines or on YouTube. Today the term is usually used by musicians who want to become known on the Internet, or by those who first encountered the Hang on the Internet and believe this is the proper name of the instrument.

The Hang is not a membranophone

There are a number of reasons why the expression hang drum is not suitable for the Hang. From a systematic point of view, it does not belong to the category of drums (membranophones). The sound produced by membranophones

originates from vibrating stretched membranes. However, the sound from a Hang, as well as from a steelpan or a gong, originates from metal structures created through deformation, compression, stretching and compacting. Provided that the instrument maker works with prestresses of the material – as is the case with the Hang – it is a question of compressive and torsional stresses rather than tensile stresses as in the case of drums.

The Hang is not a steel drum

The name hang drum is sometimes regarded as a parallel to the steeldrum. Upon closer observation, however, this analogy is not applicable because the steelpan

, as the instrument is called in its country of origin Trinidad and Tobago, is not called a steeldrum because it is a drum, but because it is made from a steel drum. In this sense, the Hang has absolutely nothing to do with a steelpan. It isn’t made from a drum (barrel) and is as such named incorrectly.

Playing the drums is a different language

Furthermore, considering the way it is played, the name drum is entirely misleading to a Hang player. A typical drum is hit, e.g. either with sticks or mallets on a snare drum, tom-tom or a kettledrum, or with the hands on a conga, bongo or djembe. Characteristic in drumming is the striking blow. An increased velocity of the hands or the stick intensifies the effect of the impulse on the membrane and amplifies the sound. On the streets and on the Internet many Hang players can be seen who also use this technique on the Hang. It often happens that when the thumb or the fingers hit the surface, the metal is deflected so much as to cause a fluctuation of the tone. An intensified, head-on hitting of the Hang does not lead to any enrichment of the sound like in a drum, but chokes and distorts it. Moreover, there is the risk of exceeding the yield strength

of the material, thus putting the Hang permanently out of tune. 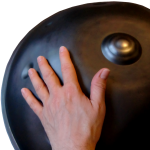 That is not the way to capture the richness of the Hang’s sound scape. This requires an effortless playing with the hands close to the metal. Playing the Hang is a soft massage and not a drum session.

In their Letter from the Hangbauhaus November 2009, Felix Rohner and Sabina Schärer wrote that “promoting the name Hang Drum … has created a ripple effect of misinformation that leads to damaged instruments, physical injury, and mental and emotional turbulence.” Already in 2007 they had appealed to several website operators not to use the term hang drum anymore. In May 2010 they stated clearly that: “We do not make percussion instruments, handpans or hang drums. Playing the drums is a different language.”

In order to counteract the usage of Hang as generic term PANArt registered the name as trademark for musical instruments in many countries. Nevertheless, “hang drum” still occasionally is used for other instruments. This is done partly on purpose and improperly by vendors or musicians to take advantage of the reputation of the Hang. Moreover people who are new to this topic often call everything looking similar to the Hang a hang drum.

that were launched as reaction to a growing worldwide interest in the Hang in recent years. An alleged “hang drum” may also be, in fact, a steel tongue drum

(also called tank drum or hank drum). A careful second look is often necessary when we encounter the term hang drum on the Internet or elsewhere.