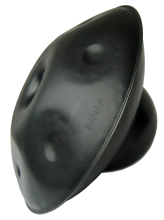 If you are a diver, you perhaps know Gubal as a little island in the Golf of Suez. But it also is the name of a musical instrument developed by PANArt Hang Manufacturing Ltd. based on the Hang® and introduced in summer 2013.

The Gubal® is a vessel made of Pang, a hardened sheet steel permeated by iron nitride needles. Pang was developed by PANArt for steelpan construction in the middle of the 1990s. The Hang was also built with this material.

Unlike the Hang the round resonance opening of the Gubal is located in the middle of the upper side of the instrument. It is surrounded by an elastic area: the Ringding. Here the player can stimulate the air inside more strongly than in the Hang to generate a strong 78 Hertz bass sound (Eb2) called Gu. The Ringding itself is tuned to four partial tones: Eb3, Bb3, Eb4 and G5. 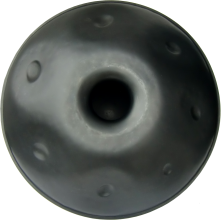 enhances the vessel volume in order to lower the tone pitch of the Gu.

Just like the Hang the Gubal is played with the hands. Due to the modifications the PANArt tuners Sabina Schärer and Felix Rohner don’t see it as another Hang version but as a new instrument. Because of the importance of the Gu for playing this sound sculpture, they called it Gubal.

In order to strengthen the trademark Hang® as general label for all sheet metal sound instruments by PANArt, that are played with the hands, PANArt decided in 2018 to call the original Hang instrument Hang® Sculpture and the Gubal Hang® Gubal. 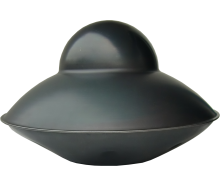 The name Gubal is also a registered trademark for musical instruments and property of PANArt Hang Manufacturing Ltd..

For the playback of the following video you need good headphones or speakers. Otherwise you will probably miss the important bass sound of the Gubal.