It seldom happens, that different versions of the hang are together in one place at the same time. A few days ago such a rare moment took place when I visited PANArt in Bern and found a lonely 2006 built hang among the crowd of 2007 built instruments in the Hanghaus. Having my first generation hang with me I used the golden opportunity to take a picture of almost the whole hang family. 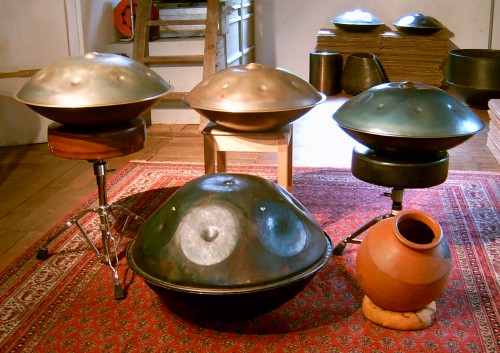 In the front row on the right you see one of the great-grandparents of the hang, the ghatam. On the left the grandfather sat down: The prototype hang built in the early 2000.
In the second row today’s used hanghang are presented. On the right a first generation hang built in 2005, in the middle a second generation hang from 2006 with it’s upper surface of annealed brass and the new ring of brass around the circumference and on the left the newest 2007 built hang with the modified, diagonal placement of the tone fields which causes yet another sound improvement.