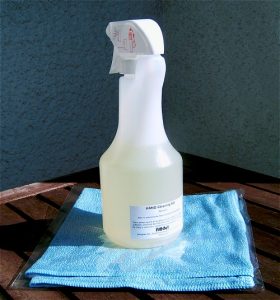 The Hang community has suggested all sorts of anticorrosive products for the treasured instrument, from B as in bee’s wax to W as in lubricants for weapons. The magic word which sages had always suggested was Biofa hard oil. However, the hard oil era is coming to an end. Since 2009 PANArt is recommending a new cleaning and anticorrosive fluid.

In the past PANArt has been using two products from Biofa, a producer of natural oils and varnishes in Germany, as anticorrosive fluids for the Hang: Universal Varnish, transparent, No. 2051 satin finish

was applied after the two half-shells were joined, and Universal Hard Oil 2044

served as a finish after the last fine tuning and was used to periodically restore corrosion prevention.

While natural varnishes are still being used, the Hang makers replaced the hard oil in the beginning of 2009 by a product from IRMCO

, a company specialized in additives for chip removal, reforming and storing metals. Whereas mineral oils were primarily used in the past, IRMCO searched for an ecological solution using biopolymers for creating the additives.

Johannes Lülsdorf is CEO of the LBI oil free GmbH

, the general agent for IRMCO in Germany, Austria, Switzerland and Malta – and plays the Hang. In collaboration with PANArt he offers a product which is not only anticorrosive, but also serves as a cleaning fluid for the Hang.

The Hang Cleaning Fluid is water soluble and free of oils and solvents. The liquid is applied to the Hang with a spray gun and subsequently wiped with a micro fiber cloth until the water has evaporated and the surface feels dry. The liquid cleans transpiration residues, finger prints, and oily, greasy as well as water-soluble residues. The product declaration states that one application of the anticorrosive fluid lasts for three months in a dry environment. In a moist environment this span is reduced to about two weeks. These specifications, however, are to be considered only approximate and vary with the frequency that the Hang is played. 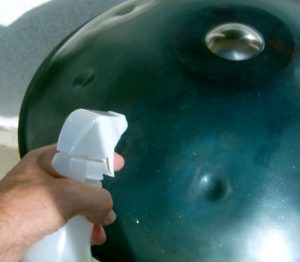 Some time ago I had the opportunity of testing the cleaning fluid on my first generation Hang built in 2005. After having sprayed the recommended dosage on the surface, I noticed that the hard oil layers began to feel sticky and started to dissolve on the micro fiber cloth. I then applied more of the solution directly on the cloth and polished the surface with it until there were no further oil residues and the surface felt dry and silky. For the next treatment the recommended 6 to 7 squirts should be sufficient to clean the surface and refresh the anticorrosive protection since there are no hard oil residues to eliminate. I was able to clean the micro fiber cloth with warm water and when it was dry, it was almost like new. I realized that all of those who were used to cleaning their Hang with a moist cloth would now have to change their habits. Since the new liquid – as opposed to the hard oil – is water soluble, it will be removed if wiped with a moist cloth and will thus have to be reapplied.

For over sea countries and where airfreight has to be done the HANG Cleaning Box is offered: 500 ml cleaning fluid soaked in 150 perforated cloth and packed in a box/can for easy use. The box has a re-sealable lid to avoid evaporation of the cleaning fluid.

For road transport in the EU the cleaning fluid is offered as 500 ml Spray Gun or 1 ltr. refill bottle.

The cleaning fluid is offered as 100 ml spray gun. Price including shipping and packing: CHF 20.00