The overtones tuned in the Ding and in each tone field of the Hang explained by means of pictures and sound examples.

are experienced as an aspect of the timbre of a musical instrument. In Asian music overtones are listened as discrete tones above the fundamental frequency

use the overtones of the human voice to create melody lines above the fundamental tone.

The Hang is a musical instrument with strong overtones. The Ding and each tone field are tuned in a special way. Besides the fundamental frequency the first and second overtone, the octave

and the compound fifth

(the quint above the octave) are tuned in.

You can discover these overtones by tapping on different areas of the tone fields. After Exploring the Hang’s overtones, you will begin to hear the overtone music above your Hang music.

In this figure you can see the positions of the notes mentioned in this article on a piano keyboard:

The following pictures show the positions, where the overtones can be excited. The mp3 files demonstrate how it sounds. To detect a discrete overtone it can help to use a single finger and dampen the position of the other overtone of the tone field. The pictures and sound examples were taken from a Pygmy Bb Hang with Ding in F3, built 2005 and a 2007 built second generation Hang with Ding in D3.

The Overtones of the Ding – 1st Generation Hang 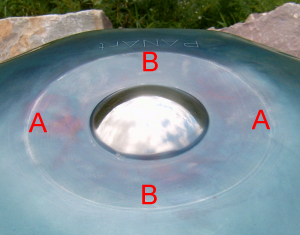 Position A: The octave (F4)
Position B: The compound fifth (C5)

The Overtones in the Circle – 1st Generation Hang 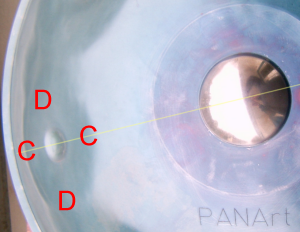 The Overtones of the Ding – 2nd Generation Hang 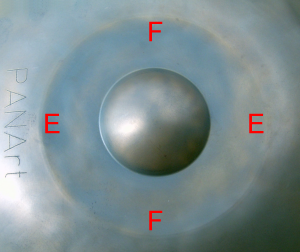 The Overtones in the Circle – 2nd Generation Hang

The following photo was taken from a Hang built in 2007. The tone fields of these instruments are positioned in an angle of 45° to the radius of the Hang. On the older instruments (first generation and 2006) the tone fields are aligned radial. 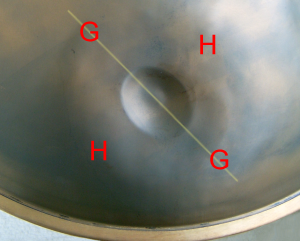 The picture shows the overtones of the tone field A3.
Position G: The octave (A4)
Position H: The compound fifth (E5)

In the sound example position G (octave) and H (compound fifth) of three tone fields in the circle are played without dampening.